Abstract of GB191007540 7540. Vogel, V. March 26. Adding and subtracting apparatus. - A machine operated by worm gearing has a series of skeleton worms, each mounted in a casing of which the sides act as guides for the operating- pin. A plan of the apparatus is shown in Fig. 2. On the casing cover a slide e is mounted to expose the numerals on one side of the worm-casing when performing addition and, by a lateral movement of the slide, a second series on the other side of the worm-casing is exposed when performing subtraction. 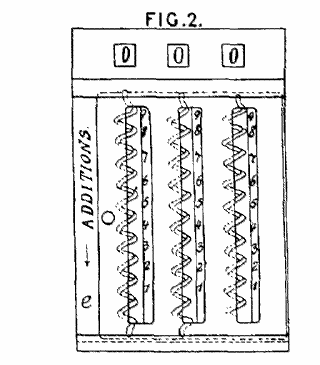